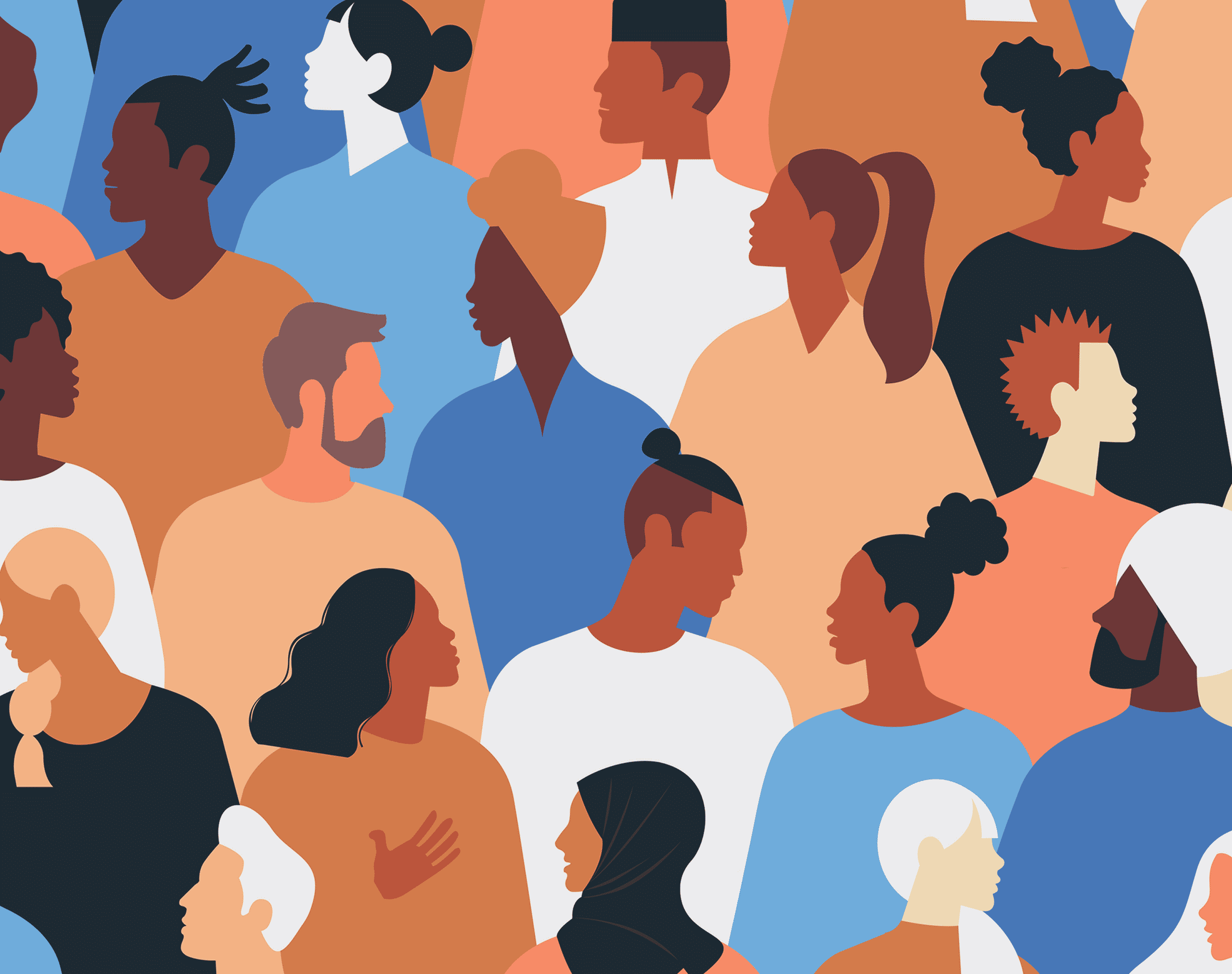 Lately folks have been saying to me, We’re all humans with the same underlying needs. Isn’t that the premise of NVC? If you believe in NVC’s fundamental premise, why do you even talk about differences between groups or have classes only for women, or LGBTQ folks, or people from the global majority or any other group?

People are genuinely confused! If humans share the same needs, aren’t you contributing to the division between people that is the cause of so much pain? How is it possibly creating the world we all want if you label and separate people? These questions keep coming up often within NVC circles, albeit very rarely from people in the groups for which those spaces are organized. So, what gives?

Let me state, clearly and emphatically, that I do believe all humans share the same underlying needs. What is also true is that humans can have vastly different experiences, whether or not we wish it to be so, because of the groups to which we belong and how those groups are perceived within the communities in which they are situated. Here’s an example of how this differential treatment might play out.

I am teaching my teen how to drive. It’s a scary proposition. I remember being stopped by police while my brother and I were driving on the highway at night with a white friend. The police wanted to confirm we had not kidnapped our friend. Like many parents from the Global Majority in the US who have had similar experiences or read even worse stories on the news, teaching my teen to drive included me talking to my teen about how to respond if they are ever pulled over by law enforcement.

“Keep both hands on the steering wheel in the ten and two positions. If you can get your license and registration out and put it on the dashboard before the officer is at the driver’s window, do it. Or, if you can’t, keep your hands on the steering wheel. When you’re asked for identification, let them know what you’re doing first before reaching for it. ‘My wallet is in my bag. I’m going to go into my bag to get my wallet to give it to you. Is that okay?’ Wait for them to say yes before reaching into your bag.”

My friends who are parents of white teens don’t give their children those instructions as part of their learning to drive.

Of course, it’s possible that a person from a historically marginalized group could share these and similar experiences in NVC circles and be met with acknowledgement and any empathic presence they desired. However, in NVC circles, people tell me over and over again that if they share some of these experiences, they are frequently met with a host of other responses – questioning the observation, denial of the meaning of the experience, an insistence on naming and holding empathy for the humanity of the person in the higher caste position, and more. And, if the person from that historically marginalized group speaks up and tries to stop the flow of unwanted responses to advocate for the kind of support they were seeking, they often encounter even more resistance. “You’re not living NVC. You’re being judgmental. That’s not an observation, a feeling, a need…” And so, many folks from the Global Majority talk about bringing a carefully constructed persona to NVC circles — one that is on guard for the microaggressions that happen in any moment, one that is prepared for the shock of realizing how disparate our experience is from that of most of the folk in the room, one that is ready to withstand the repeated pain of not being received, not being held with the same resonance and care we see extended to others.

What can you do, then, if you are offering programs to communities that are richly diverse? I advocate that we should think deeply about the needs we are attempting to meet in offering these spaces and choose strategies that aim to meet those needs for all members. For example, some needs we attempt to meet when we share NVC include learning, community, and healing. There is a belief among some NVC facilitators that offering the same content to everyone would be sufficient to meet those needs. Teachers working with youth know that they have to modify the ways they deliver the content of their lessons (visual, kinetic, auditory, individual, group – so many possibilities) in order to effectively engage students and contribute to learning. As trainers, we must learn to do the same. Here are just some of the many ways we might adapt how we approach our teaching to support greater participation and inclusion for all.

Perhaps you want to support folks in building their capacity to hold empathic space. Working with beginners, you might ask them to take turns sharing about an event in their lives while others practice reflecting feelings and needs. If the goal is the practice of classical NVC empathic reflection, we could offer several modifications to the basic exercise. A common modification is to ask folks to choose a situation to share about which they are not very triggered – perhaps a 2 out of 10 on an intensity scale. But, if I’m acknowledging group differences in experience, I might also recognize that one person’s 2 may be another person’s 10 because of the lack of shared experience.

I recall how disconnected I felt early in my NVC learning when I shared some of my experiences with racism when asked to give a low intensity example. I wasn’t very triggered since these were old experiences I had long ago processed. Instead, I was looking forward to the experience of empathy. However, my sharing was met not with empathy, but with disbelief or pain for the listeners who were shocked about my experiences. It would have been so helpful to me if the facilitators at the time had invited those folks from the GM majority who wished to do the exercise together to do so. My needs for learning would have been much more deeply met were I to share my experiences with those who, having lived through similar situations themselves, were able to hear my stories with less shock and more grounded presence. There would be so much more space for learning and practice if I could dive into the practice without having to navigate the shock, and sometimes disbelief and judgment, of my group mates and sink into the practice of giving and receiving empathy.

Another example where a need for modifications might arise when you are teaching relates to whose voice is heard in the workshop. You might realize that as you ask for questions or feedback, primarily white people respond. Perhaps only one of the handful of people from the global majority chimes in periodically. If your goal is to contribute to an experience of NVC community, you might be concerned about the degree to which the silent global majority students are experiencing a sense of community. To invite their voices into the room, weaving the web of community experiences, you could modify the form of response you’re seeking. Instead of asking folks to raise their hands, you might ask them to write their input then collect them. As you respond to the written questions and comments, selectively choose to answer those posed by people who speak less often. You may ask people to share their feedback using art or movement, in addition to or instead of words. You might cluster folks into groups and ask each group to report back a harvest of the questions. All of these strategies are more likely to invite participation from the less vocal voices at a greater level than we get just by raising hands alone.

On the other hand, if my hope is to meet needs for healing by giving each person the opportunity to express in community and trust that their opinion is wanted and matters, you might choose an even more explicit way of managing the class discourse. You could issue specific invitations to hear only from those who have not spoken before. You could ask to hear only from those whose experience has not yet been spoken into the room, thus bringing in those whose experiences might be seen as outside the group norms. You could choose to interrupt those who speak often, letting them know you are doing so to create space for those who might have less ease in bringing themselves into the space. Sometimes, you may have to interrupt the same person more than once!

These examples may give you a sense of the many considerations we want to hold if we truly value making NVC meaningful and accessible to diverse communities. The strategies I offer here are not meant to be a complete nor final answer to how to do this. In fact, more important than identifying a few strategies is a deep exploration of the ways our approach to the work we do and the folks we interact with has been informed by cultural beliefs that prioritize some groups over others. We need to examine and unlearn those beliefs. Only then will we have the capacity to recognize and begin to shift those places where our behavior is impacted by these unconscious beliefs. We will be more likely to meet with curiosity any signs or feedback that our efforts were not received as we had wished, recognizing the commitment and ongoing effort that is needed for such an extensive consciousness shift.

Sharing NVC effectively in ways that take into account how different experiences and societal treatment result in differing needs within our communities is crucial if we want the consciousness of NVC to spread throughout the world. When we treat everyone the same, we actually perpetuate inequities since we are not attending to differences in impact or capacity. I encourage you to look at the ways in which you are sharing NVC in the world. Who continues to show up at your offerings? Whose experiences are shared and acknowledged in the groups and whose are not heard? Who receives empathy and for what? What are you doing to ensure equitable, empathic holding of all who come to you to learn?

Read more about my new offering:

Are you an NVC enthusiast who would like support in sharing NVC in a way that attends to the needs of people who have been historically marginalized? Explore NVC for All – Learn to Share NVC While Attending to Power Differences.